akening volcano is located in the southern part of Kamchatka. If you take the distance to the city of Petropavlovsk-Kamchatsky, the straight line, it will be about 100 km to the northwest. Unfortunately or fortunately, but we don’t have on the Kamchatka Peninsula straight roads. So we have to ride.

Get to Bakening need for federal highway P-474, which runs in the vicinity of the foot of volcano. Although up to the volcano on the transport does not have to drive up, so you should take a walk 10 kilometers This accessibility makes the place popular among travelers who want to enjoy the views of pristine wilderness.

Among the mountain ranges Ganal Ridge Volcano Bakening stands out for its grandeur. Towering above sea level 2277 meters, it is almost two times higher than the surrounding peaks. 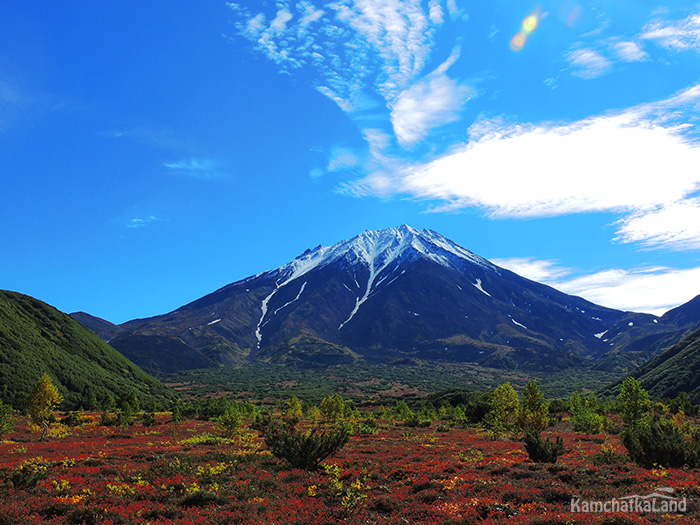 Volcano Bakening belongs to stratovolcano. What does this mean? Word stratum with Latin translations as a layer. And our volcano it turns out, is made of many layers of lava and volcanic ash deposited. Typically, these volcanoes are located in the zone where the oceanic plate is not rarely comes under the mainland. Most eruptions of stratovolcanoes are explosive. 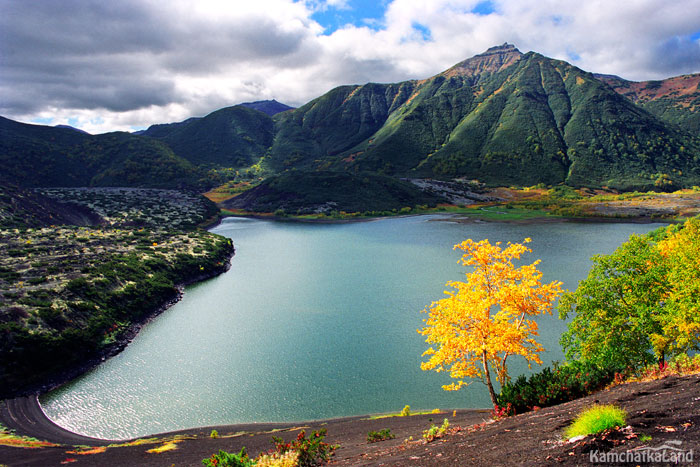 At the moment the volcano Bakening is considered extinct and does not keep any activity. The last eruption took place allegedly more than 500 years BC.

The last eruptions, the time and the water gradually change Bakening volcano. Erosion has left deep ravines on the slopes of the volcano, which extend to the foot. Steep cliffs form tapered ridges that create a harsh landscape of the area. If you climb to the top, you can get into the crater. The walls of the crater also not preserved their integrity and destroyed on one side.

Many years ago, lava flows and the collapse of rocks blocked the river flows, which originate on the slopes. As a result, it formed a chain of 6 large lakes around the volcano Bakening. Large and small lakes create a closed atmosphere that attracts many photographers.

Each lake has its own, unique scenery. Egorov and Wolverine Lake, situated at an altitude of 1 km, the face of the desert. Here everywhere  are cliffs, sand and ice. Only here and there breaks light vegetation. Those lakes that lie at the foot of volcanoes lush thickets along the banks. It is not rare to find the bears who enjoy the berries, and in the waters inhabited by trout. Therefore, we recommend to visit each lake and feel all the nuances of the terrain.

In the Bakening region originate three major Asian rivers – Srednaya (average) Avacha, Kamchatka Bystraya (Fast) and Pravaya (Right). These rivers are rich in fish, but in the summer, during the spawning season, the rivers have many thousands of salmon to leave their offspring. Perhaps that is why the volcano Bakening indigenous inhabitants of the peninsula called "Bakang," which means a place where treasures are stored. Even so called caches raised above the ground, which could not get the wild animals. 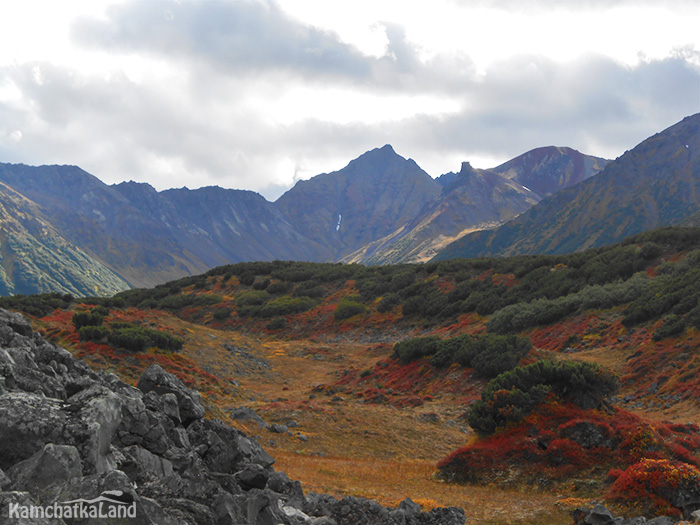 For quite a walk in the surrounding area, you need to spend at the volcano Bakening least 2-3 days. During this time, you can climb to the top and visit all lakes.

In the vicinity of the city, in an easily accessible place is another giant. In the area of Viluchinsky volcano you will find and waterfall and hot springs. Visit this place definitely.