Helicopter tour to the Valley of Geysers
Price
48 000 rub $ 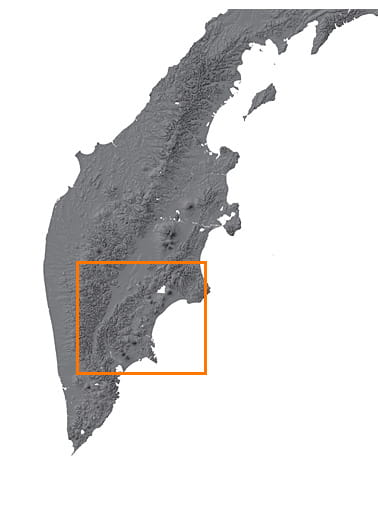 Helicopter tour to the Valley of Geysers

Duration of one-day helicopter tour to the Valley of Geysers takes about 6 hours and it may become an interesting complement to any your tour. You can book this tour separately as well.

The tour doesn`t require any special physical training and special travel skills. However, it`s better to have comfortable travel shoes with hard sole and have warm clothes or windbreaker, just in case.

Swimsuits if you choose a tour with landing at the Nalychevo valley.

Don`t forget to charge your photo and video cameras as well.

One day trip to the Valley of Geysers in Russia

Individual tour to the Valley of Geysers:

The total cost for a group of 1-3 persons – 430 000 rub. The tour has a helicopter flight (MI-2) to the Valley of Geysers and Nalychevsky springs.

Choose a convenient date for you and send letters to our email or make a book on the phone - this is everyday`s tour.

The helicopter tour may be cancelled or changed to another day in connection with non-flight weather. The payment is fully refundable in case of cancellation.

Helicopter tour to the Valley of Geysers and Uzon volcanic caldera

The Valley of Geysers is a small area of territory located in Kronotsky Nature Reserve. This is well known worldwide place which attracts a lot of tourists from different countries and it is on the list of the seven wonders of Russia. There are a lot of hot thermal springs, active geysers, bubbling mudpots and different volcanic manifestations on the territory. The famous soviet film "Sannikov Land" was shot there in the 1970s. Now you also have a possibility to visit this striking place.

Our trip begins with boarding the helicopter in the heliport in Elizovo city. The whole group meets at pre-arranged place in good time. Upon your request we can offer you transfer from Petropavlovsk-Kamchatsky or from the other places, which are convenient for you, to the place of meeting.

We begin our trip on the board of one of the most safety helicopters all over the world - MI-8 and we make a flight of 200 kilometers along the beautiful landscape of peninsula. The breathtaking views of the mountain ranges and majestic volcanoes open before your eyes from the height of birds flight and we fly over tundra, lakes and rivers of Kamchatka.

We fly over the two active volcanoes during one-hour`s flight as well.The first one is Karymsky volcano. Despite it has a small height of 1468 meters, it is very active. This volcano has erupted two times for the last ten years. On flying to the volcano you can see a view of lava circle, surrounding the giant, and the smoking crater.

The second one is Maly Semyachik volcano. It has a distinctive feature such as the azure crater lake. You can see the color of lake only from the distance; if you stand close to the lake the unusual color disappears. The bright azure-grey color is conditioned by sulfur and the highest acid concentration all over the world. The acid value (pH) of the lake equals approximately 1. You can snap photos of this beauty through the windows of the helicopter.

One-day trip to the Valley of Geysers in Kamchatka

After fascinating flight we finally land. Our guide tells you about the rules of tour round the Reserve before the tour to the Valley of Geysers starts. Travel within the territory to the observation desks is accomplished by only the wood decks which were made for preserving nature in such form of which it existed for hundred years and for your safety as well.

You can see a large complex of geysers called "Vitrazh" (stained-glass window) from the observation desk. It was no exaggeration to say that this is the main panorama of the valley. The nature creates wonderful color blending of yellow, silver and brown tints. Shrouding this splendor in mist of fumaroles and geysers, it immerses you into the real tale.

According to schedule about every hour one of the largest geysers, "Bolshoy" (The Big) shoots water and stream into the air. All tourists gather together to watch it. Some geysers often erupt, but the other ones, such as "Grot" (grotto) geyser erupts once every few years. You can hear every minutes roar and bubbling of shooting water in the whole valley.

The powerful mud stream flowed down and destroyed some attractive places in the Valley of Geysers in 2007. The area was closed for tourists for some time and there was recovery work. Unfortunately, it was failed to renew some sights. At the same time the new landscape was formed as a result of landslide. Appearing of Geysernoye lake is also consequence of those changes.

The Bliznetsy (Twins) mudpots attract justified attention to itself. They look like each other, so they were named twins.

You also can see a lot of other amazing places. The whole tour to the Valley of Geysers, accompanied with the guide, lasts about an hour and a half. You can get the chance to visit this unique place just once. Sometimes some small and large wild animals become guests of the Valley. The most frequent visitor is a brown bear. With any luck, you can see it during our tour. After visiting the Valley our tour doesn`t come to an end. We make a flight by helicopter to another point - to Uzon volcanic caldera.

An excursion at Uzon volcanic caldera

Uzon volcanic caldera is a large caldron with a flat bottom of 10 kilometers in diameter. We can see contemporary volcanic manifestations, such as mud pots, acid lakes, hot springs and fumaroles shooting flows of stream. Uzon is also famous for having the youngest source of oil in its area.

You can move on the territory, only if you are accompanied by the guide. The temperature of the lake water may reach as high as 80 degrees. You must listen to your guide very carefully. Some lakes are filled with not water, but it may be acid. Therefore they have an unusual blue tint, just like, you find in the cartoons about milk and honey. You can feel like fairy-tale during the whole tour.

The diversity of colorful minerals and different natural elements of surrounding area make you feel like on another planet. Especially if you are a resident of the megalopolis you can really discover something new for yourself. You can immerse into the wild nature which was formed thousand years ago.

While walking along the area of caldera you can meet such funny local inhabitants. They don`t afraid of tourists, because the guards of Kronotsky Nature Reserve protect and take care of them.

However, you can meet unfunny ones - a king of forest that gets round their territory.