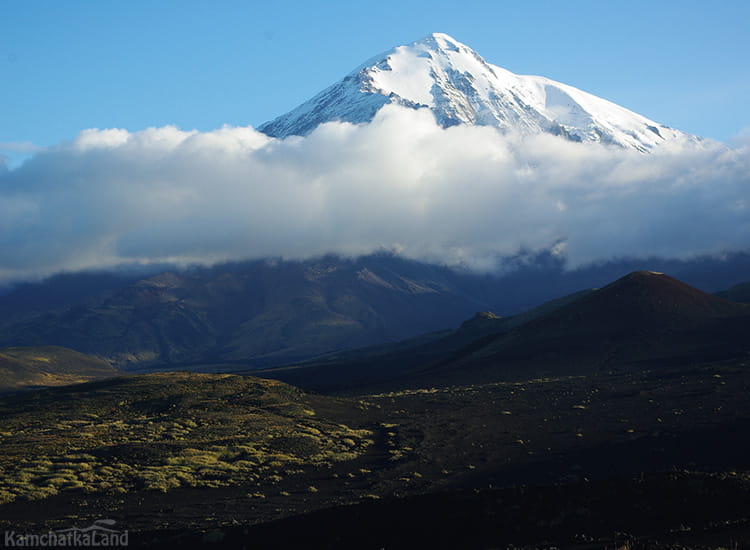 Tolbachik is a stunning volcanic range situated on the east of the Kamchatka peninsula, to the south-east from Kluchevskaya group of the volcanoes. There are the nearest villages, such as Kluchi, Kozyrevsk, Lazo, Atlasovo, as well as Mayskoy.

The range was created by two stratovolcanoes, such as: Plosky (Flat) Tolbachik and Ostry (Sharp) Tolbachik. The height of the first volcano is 3140 meters and the height of Ostry Tolbachik is 3 680 meters that is the last height measure for volcanoes. Likewise, it should be noted that Plosky Tolbachik is an active volcano, whereas its neighbor is extinct one.

The trip includes climbing the top of Plosky Tolbachik volcano and watching the consequences of its eruptions for a whole day. 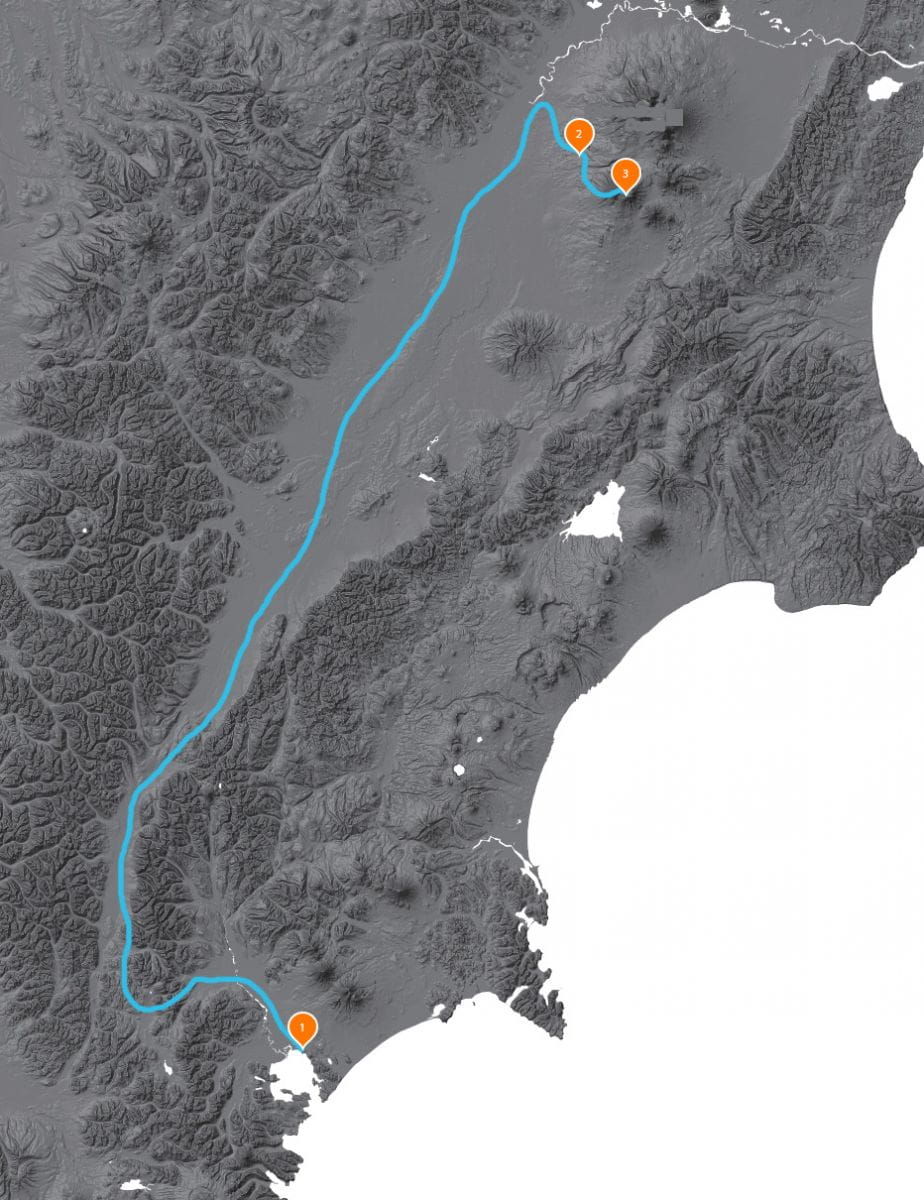 Ascent to Tolbachik volcano in Kamchatka

Day 1 – Group gathering at 7AM. Transfer from Petropavlovsk-Kamchatsky. It takes about 10 hours for driving 500 kilometers. Lunch in Milkovo village. Evening arrival at Tolbachik dale, the Сlaw cone. Setting up a camp. Overnight in tents.

Day 2 – Breakfast. Climbing Plosky Tolbachik (3140 meters). Lunch/snack on the top of the volcano. Return to the camp. Dinner. Overnight in tents.

Day 3 – Breakfast. Transfer to the volcanic cones of the Northern Breakthrough. A trip around the places of the Fissure, Dead forest and Lava caves. Overnight in tents.

You needn’t to bring group gears such as tents, campfire equipment etc.

A four-day tour to Tolbachik volcano in Kamchatka

Day 1. Travel by vehicle to Tolbachik volcano. Overnight in tents.

Early morning group gathering. Our driver will drive us from Petropavlovsk-Kamchatsky to Tolbachik. Driving time is about 10-12 hours.

On our way we will make a stop for lunch in Milkovo village situated a bit closer to Petropavlovsk-Kamchatsky, 300 kilometer far away from the city. First the name of the village was mentioned by a famous explorer of Kamchatka, Stepan Krasheninnikov in his notes. The village can accept guests. There are hotels, historical museum, ethnographical center, kindergarten, as well as schools there.

We will reach the Tolbachinsky dale, the vast lava field in the evening. The dale is surrounded by the Tolbachik river valley from the southwest and by the Tolud river from the east. The Tolbachinsky dale is a high plain spreading over 40-45 kilometers southwest from the base of the volcano. The width is 30 kilometers. The true altitude ranges from 1800 to 2000 meters at the place where the dale merges with the volcano and from 80 to 120 meters at the place near the Tolbachik river. Some of numerous cones is higher than the dale, such as: The First and the Second cones of the Northern Fissure, the Vysokaya cone etc.

We will set up a camp near one of the cones – the Сlaw. After setting up a camp we will have dinner and go to sleep. We will have to get up early tomorrow.

After having breakfast we will go on our trip. In this day we will climb Plosky Tolbachik volcano. The path is created by solidified lava and cinder. The volcano has a flat top which forms the caldera of 3 kilometers in diameter. The caldera was practically filled in the result of numerous eruptions. The glacier is at the top of the volcano.

Before great eruption there was a small active crater (350 meters in diameter) till 1975, but after the great fissure eruption the part of the volcanic summit had been collapsed. Therefore the precipice of 1,8 kilometers wide was formed. At first the volcanologists were observing a lot of fumaroles and a forming crater lake with amazingly blue color. But this process had not come to an end and now there is no crater and the fumaroles don’t display any activities.

There is a large quantity of the cinder cones (more than 120) which are on the slopes of Plosky Tolbachik and Tolbachik Valley. The eruptions were recorded since 1740 to 1976 and it was mainly a kind of ash. Sometimes scientists notice the formation of the lake in the central crater. The most massive eruption happened in 1975 for the entire observation period. It was named as the Great Tolbachik Fissure Eruption. Just as a result of this dramatic event the cones of the North and South Breakthrough, which we will be able to see, were created. The last strong activity was recorded in 2012 and referred to the Fissure Eruption named “50th Anniversary of the Institute of Volcanology and Seismology”.

After climbing the top, we will have a lunch/snack. As well you will be able to enjoy stunning views from the summit. Next we will descent to the camp, have a dinner and spend the second night in tents.

After having breakfast we will go by vehicle to the cones of the Northern Breakthrough.

The Great Tolbachik Fissure Eruption is one of the most interesting places in the area and it had been lasting for one year and a half, from July 1975 to December 1976. As a result many different cones with height of 300 meters were created, including one of the largest cones, the Northern Breakthrough, and lava fields. Now the cone keeps its activity.

After driving to the place, where our trip starts, we will listen to safety instructions and begin our climbing the cones. The weather will most likely be foggy so you need to watch under your feet so that you can see fanciful forms of cinder and volcanic bombs, as well you will be able to feel sulfur smell. Moreover you will be able to feel the hot ground through your shoes with hard soles.

A trip around the Northern Fissure takes about 4 hours. After descending we will have lunch and go on our trip to the lava caves. Our next stop is the Zvezda (Star) cone. There we will walk around the Dead forest.

The Great eruption destroyed every living thing within a radius of the few kilometers. The forest was burnt: heartwoods were scorched; bushes, herbs were bared. Now this place is named Dead Forest. Before the eruption animals left their places because they feel a future danger thanks to their instincts.

The terrain became empty and looked like non-living endless dark fields. This landscape gave an idea to organize a test area for spacecrafts in the time of the Soviet Union. Thus the base was built for testing a moonprobe, and then it was moved to another place. However it is impossible to visit the old base because it was vanished under the lava in the time of the eruption of 2012. Returning to the camp. Dinner. Overnight in tents.

After early morning group gathering we will be driven to Petropavlovsk-Kamchatsky. Travel time takes about 10-12 hours. On our way we will make a stop for lunch in Milkovo village.