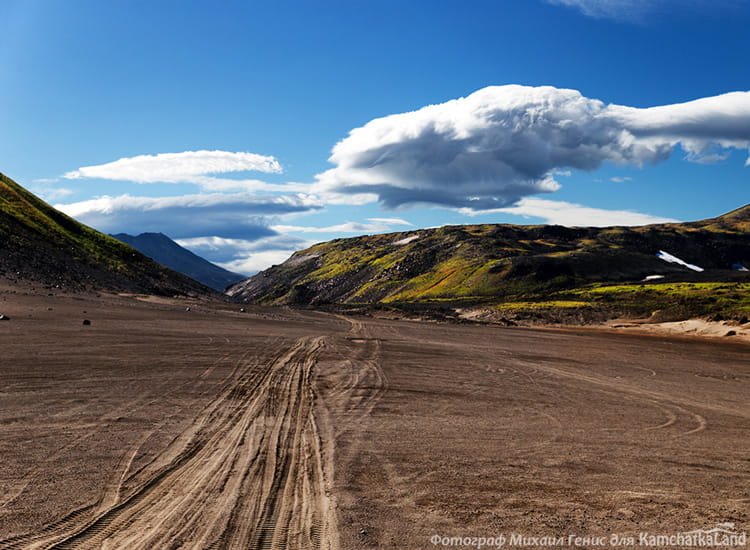 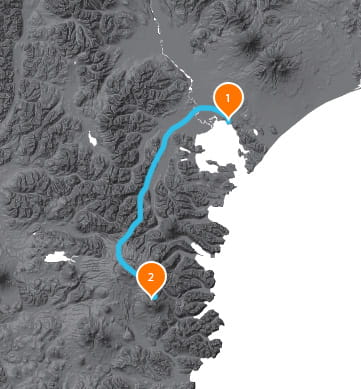 One day trip to Mutnovsky volcano

Climb of Mutnovsky volcano and trekking excursion along the crater

How do we climb the crater of Mutnovsky volcano?

Very long ago there were no mountains all over Kamchatka peninsula; there were only grasslands where young herdsmen pastured their cattle. Everyone had his place and lived in peace and harmony. But one day a woman of unearthly beauty came to these lands. So, every youth wanted to marry with her. They fall in love with her, but only one of those youth might win her hand in marriage. For this they started to fight to the very death.

A very old shawoman wanted to stop their fight and she threatened by saying that she would turn them into stoned mountains if they wouldn’t put an end to the war. However they didn’t hear her threat in the heat of the battle. Shawoman kept her word so hero-mountains rose all over Kamchatka. Mountains had hot beating hearts inside which were lighted by love. They broke the tops of the mountains and fire blood flows down the steep. Shawoman couldn’t turn their love into stone.

Thus the volcanoes appeared all over Kamchatka. Their steep slopes are covered with alpine tundra and its canvass is painted by infinite numbers of tint.

Mutnovsky volcano climbing, a path along glacier leading to the crater

There is successful opportunity to visit the eldest volcano in Kamchatka peninsula – Mutnovsky volcano. Uniqueness is that crater wall of one side was broken and it opened access to earthly wealth.

Driving by off-road vehicle we cross the bottom of dry lake and reach the foot of the volcano. It requires less strength and time for climbing because it starts from the foot of the volcano. Therefore climbing hour is no longer than daylight hours. When coming closer to the crater you can see rising steams and fuming fumaroles located at slopes there and here. Powerful gas flows with a temperature of up to 200-300 degrees Celsius are ejected from the crater fissure and cracks, and then towers of bright yellow sulphur crystal appear there.

Extinct cone is located near the north crater, it’s the highest one with a height of 2323 meters. You may spot it from Russkaya bay. Mutnovsky volcano climbing is interesting adventure which is suitable for almost everyone and even for children. So, even couch potato without having special training can go on climbing at first time here. Stunning views which we go pass never leave your mind.

This tour is a good opportunity to see a mix of ice and flame. Massive glaciers fill a huge crater. They slip down to hot fumaroles because of its weight. Glaciers always melt by breath of earth and give a life to small rivers which fall into the Vulkannaya river. The upper fumarole field is considered as the most dangerous. Huge blocks of ice under hot steams from planetary interior are melting and breaking afterwards they fall down without warning.

You may see gas eruption during Mutnovsky volcano climbing. The volcanic eruptions started hundred and thousand years ago therefore crater walls look like unearthly landscape painted in unusual way. Temperature has changed slope rocks for thousand years. There is a little chance to see the bottom of the hole because crater filled by gas.

In the whole history the volcano erupted no less than 16 times. Sometimes its silence had been lasting for about 40 years but sometimes it lasted for a few months. Almost all eruptions happened in Active crater. It attracts tour tourists to Mutnovsky volcano because it’s frightening and interesting to look into there.

A trekking excursion to Mutnovsky waterfall

Another wonder of this place is the Vulkannaya river running along the course formed by lava deposits. The river drops down from a height of 80 meters into narrow fissure as if it was hacked on the edges by a huge sword. No human have stepped into the bottom of this fissure. The rock may fall down any time so it was named as “Dangerous ravine” for good reason. The canyon and the waterfall are so beautiful that tour participants keep unique impressions in their memory which are not accessible in any place of the world.

Recently Kamchatka climate became warmer. Mutnovsky terrain is the most lavish with rainfall accumulation for a year and it gives a life to stunning Kamchatka ice caves during snow and ice melting. The doors open and close unpredictably like Aladdin’s magic cave. But if you are lucky enough you may visit one of these caves. The ceiling of the cave becomes so narrow that sunlight goes through ice strata that make it more mysterious and incredible. Fanciful images patched with different color and shapes constantly appear on the ceiling. And tourists’ flashlights create light images like kaleidoscope patterns which you never see anymore.