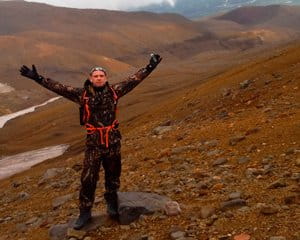 Many tourists, who come to Kamchatka, don`t have suitable training for long hiking with rucksacks, and some of them prefer not to live in tents. But they do want to see beauty of Mother land at the same time.

We have made a special comfortable tour around five most popular and interesting places for such kind of people. They are fishing, ascending to volcano, observing bears, flight to the Valley of geysers and cruise.

You can the program below. We hope it will be interesting for you. 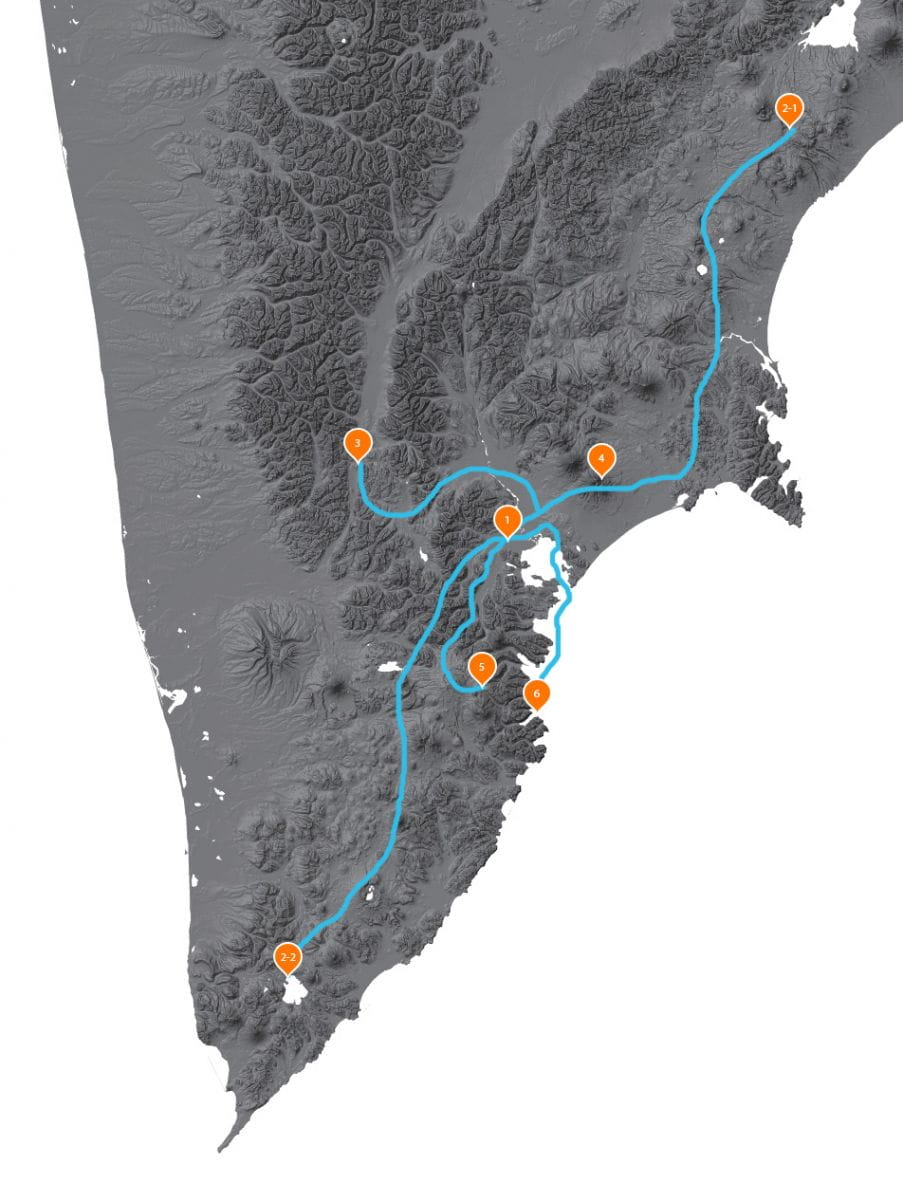 Day 1 - meeting at the airport. Transfer ro the hotel. Overnight in the hotel.

Day 2 - moving to volcanic plateau at Mutnovsky volcano foothill. Ascending to the crater. Overnight in the hotel.

Day 4 - ascending to Avacha volcano. Overnight in the hotel.

Day 5 - cruise to Russian bay. Overnight in the hotel.

Day 6 - helicopter and pedestrian excursion to the Valley of geysers and Uzon volcano caldera or helicopter excursion to Kuril lake to observe bears at salmon spawning period; (your choice, in group). Returning to the hotel. Supper. Overnight in the hotel.(This excursion does not included to the tour cost. It is possible to change this excursion to another)

Day 7 - transfer to the airport

The cost does not include:

Photos From This Trip 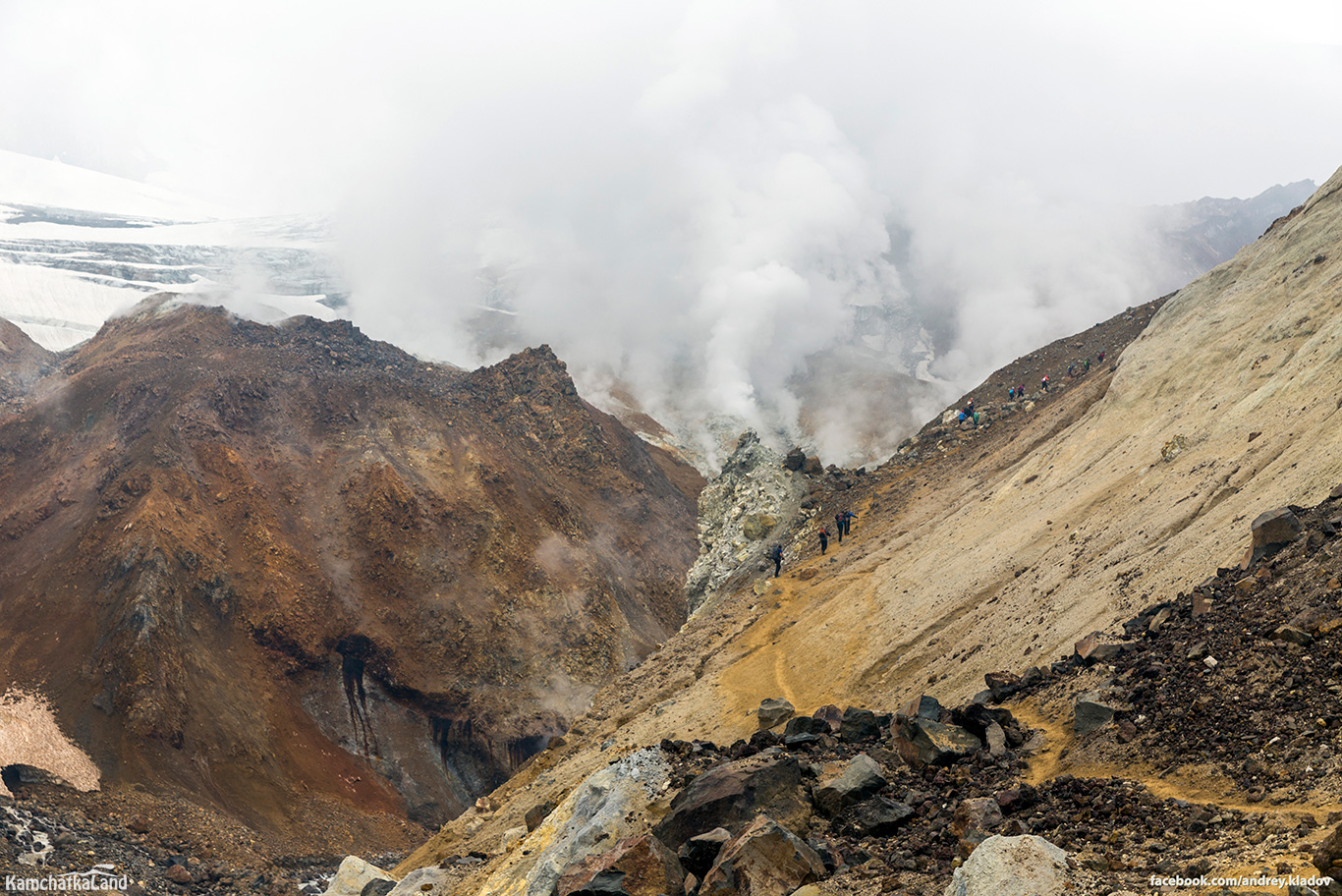 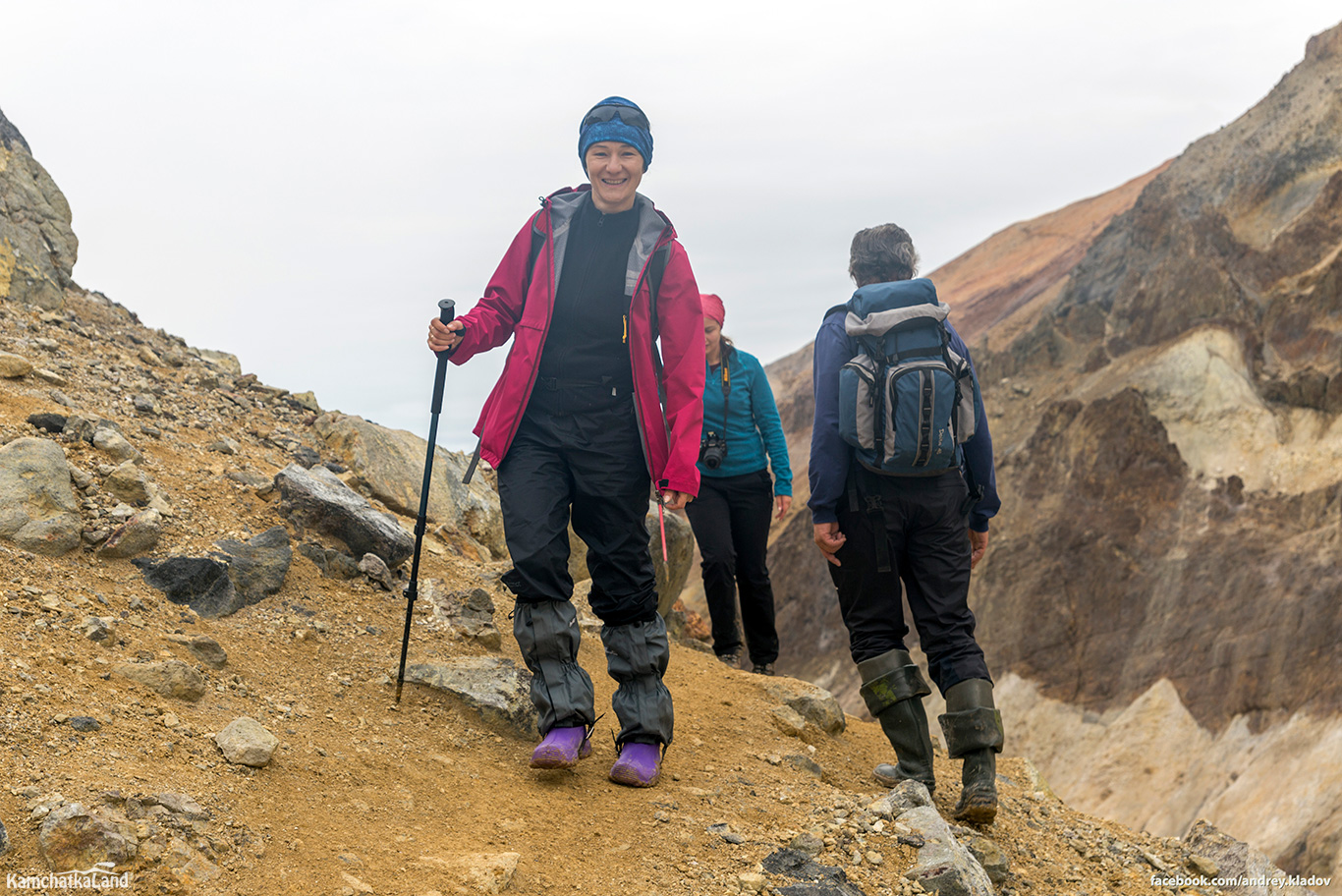 We greet you at Kamchatka! A long flight is over and now is the time to plunge into the trip! Our guide, holding a sign “Kamchatkaland” is waiting for you.

This day is dedicated to rest and acclimatization. Delicious supper, thermal water swimming pool and tight sleep will help you. We are going to the hotel. Gain strength! Brand new impressions are waiting for us tomorrow.

Mutnovsky is one of the most impressive and memorable Kamchatka`s volcano. It`s located in 70 km from the region center. Its nearest neighbour is Gorely volcano. These two volcanoes and Vilyuchinsky volcano and Asacha volcano form a big volcanic massif, which has one of the most powerfull fumarol, mud and gushing springs.

Our ascending will be accompanied with specific sulphur smell, puffs of smoke, low-frequency rumble and other volcanic processes. You can see massive glaciers, melting under hot vapour puffs here. Melting water runs into a gorge and forms Volcannaya river, which cuts walls of north crater and falls dowm, making up 80 m waterfall. All these beauties will be accessible for us. We get to the waterfall as close as it's possible, go along a wall of Opasny canyon and make some picturesque photos. During the route you will have a snack. Return to the hotel by evening.

Day 3. Without tents tour. Rafting and fishing at Bystraya river.

Today you have an opportunety to observe Kamchatka from another side. Rafting here is a going dowm over calm parts of the river. Bystraya river is an inflow of Bolshaya river, it`s typical montain river. Its length is 270 km. Bystraya river flows into Okhotsk sea. It is the longest river in Kamchatka west coast.

Guides-instructor will steer our inflatable paddle raft. All you need to do is to enjoy picturesque landscapes, observe birds and animals, spawning of kamchatka salmon. About 40 thousand specimens of king salmon, 300 thousand specimens of sockeye salmon, 20 millions specimens of humpback salmon, also coho salmon, chum salmon and other kinds of fish come here for spawning. River basin is full of char, kamchatka grayling, white spotted (siberian)char and rainbow trout.

Our route will go from Malki settlement to Bolshaya river estuary, outside settlements, thus you will see wild nature. Also this part of river is the most optimal for fishing. You can catch king salmon from the beggining of June till the middle of July, chum salmon - from the middle of August till the end of September. Char is here almost the whole summer. August is called Season of kamchatka grayling. Rainbow trout is very numerous here.
For savety of your cameras we recommend you to have mini watertight bags during the rafting. Return to the hotel by evening.

Wake up early and have breakfast. Coming ascending will not be very easy, so it is better to eat well! At 7 o`clock, we will move out.

In 1,5 hour we will come to the foothill and settle temporary camp. Having listened our guide`s climbing recommendations, we will start ascent. We will have an average pace for comfort of each participant of the group. If you feel that it is impossible to continue ascending, you will always be able to return to temporary camp.

The ascending is not very steep, but long. It usually takes 6-7 hours to get to the top for people of average physical condition.

Before climbing to the cone, where the angle of slope is steeper, we will have a short halt and gain strength. There will be an amazing panorama view for those, who have not get off the road and overcame all the difficulties of the way. There will be Pacific Ocean, Petropavlovsk city, Nalychevo nature reserve and, of course, domestic volcanoes on the horizon. We are on the summit!

The very crater has a bowl form, it fills with hardened lava, which is like a treasure. You will feel the smell of sulpher and observe fumarole activity. The descending takes less time. We will return to the hotel in the evening.

Having taken a cruise at Russian bay, you can have most incredible impressionsof Kamchatka. Excursion time is about 10 hours, so we leave the harbour early. Amazing mountainous landscapes will meet you immediately after leaving Avacha bay. You will pass by the most popular rocks in Kamchatka -"Three Brothers". Fabulous panoramas will be around you, while you are approaching the rocks. Going along the rocks, you will start see birds, putting their bills into the water. They are small tufted puffins, which are catching tasty fish diligently.

Nexy point of our excursion is Starichkov island. As it is a reserved territory, it is strictly prohibited to land there. Approaching to the island, you will be surrounded by birds colonies hubbub. You will see sea animals, lying at nearest small rocky islands. They are ringed seals, seals and sea lions.

Slowly we will reach main destination - Russian bay. It used to have an itelmen name "Akhomen" till 1952. Depth of the bay is highly considerable. It is perfectly protected from any storm. It is big enough for big ships as well. During the Second World War it was one of ship base. There was a border post till 2011. There is a lake right above the bay. Its water contains considerable concentration of silver. We will pass by Kekurny cape, where sea lions rookeries are.

The biggest inhabitants of seas - whales and orcas come here in summer, looking for fish. You will remember this meeting for a long time. Their dorsal fin are visible from a great distance. During the cruise you will have deep water fishing. It is one of tourists favourite occupation. A professional diver will sink to the bottom and take some sea urchins, which are very valuable in some counties. After this long trip you we have hot dinner with fish soup back way to the harbour of Petropavlovsk-Kamchatsky. Return to the hotel by evening.

Day 6. Without tents tour. Helicopter and pedestrian excursion to the Valley of geysers

Valley of geysers is a natural monument of internatonal meaning.The only geyser field in Eurasia. It takes second place in the world according to the number of geysers outlet on the spot. It lies in a deep canyon, in a gorge of which Geyser river runs slowly. Walls of the gorge keep hot water, mud, vapour and numerous gushing springs outlets. Here, on this sanctuary territory, you can observe all diversity of nature, even its most fantastical forms. Climate of central part of Kamchatka and here is different. Many complex biological systems exists here.

You must walk on special made paths. It is strictly forbidden to step outside from them. Inspectors of the reserve will be next to you during the whole route and tell you about necessary precaution.

After observing the sights of the Valley we will get into the helicopter and move to the next point - Uzon volcano caldera.

This place is a vast hollow with 10 km diameter. The surface is rather flat, you can even think that it is not a volcano. But such volcanic processes as mud cauldrons, acid lakes and hot fumarols will definitely convince you. You must follow safety instructions here as well as in the Vallye of Geysers. Guide will tell you about it. There are many places and things here, which are absolutely different from what they look like. For example, some lakes fill not with water, as you may suggest, but with real acid. During excursion you can run into different animals: brown bears, red foxes and other.

After walking we move to natural park Nalychevo. Here we will bathe in hot springs and have tasty dinner. Retunt to the hotel by the evening.

Kuril lake is a reserved territory, it`s a part of South Kamchatka reserve. It is a place were you have 100% chance to see bears.

Annually, in summer, in August brown bears try to come here first, as it is the very place, which is one of the biggest spawning area of kamchatka salmon. Hundreds of bears come here for feast. All of them are protected by reserve.

In addition to visiting the point at Kuril lake, during the helicopter flight we will fly round Karymski volcano and Malyi Semyachik volcano, have an excursion in Ksudach volcano caldera and bathe in Khodutka hot springs. Return to the hotel.

Day 7. Without tents tour. Transfer to the airport.

We do hope you have fallen in love with Kamchatka! We are waiting for you here again for new impressions! Bon voyage!