Death Valley in Kamchatka, which full of life!

"The very first condition of immortality - it is death"

Kronotsky reserve - a place of natural origin, plays a big role in the history of the flora and fauna of the Russian Federation. On its territory, thanks to the skillful actions of employees and scientists have been preserved such rare species as: reindeer, snow sheep, sea otter. Also here since ancient times it is a struggle for the preservation of rare plants such as fir graceful.

This place is known for its many attractions such as volcanoes, lakes, geysers, but a special role in the popularity of this reserve played an interesting and still a strange sight - Death Valley in Kamchatka. We'll talk in this article about this miracle.

In general, the history of this place begins long before the time when it was discovered. The creator of this valley - not a man, but the nature with its sometimes ruthless and inexplicable phenomena: volcanic eruptions, boiling lava, minerals and gases that are in the bowels of the earth. It is a land of paradoxes, the land on which there is a place not only of life, but death as an inseparable part of it.

The official history of Death Valley in Kamchatka begins much years after the appearance of the reserve. For a long time, calculated in years, no one knew about it, although it is in the immediate vicinity of the famous Valley of Geysers, which is revered and loved, both scientists and tourists.

It's funny, but the fact that in those distant Soviet times, one of the expeditions, the main task of which was to study the nature reserve. They camped quite close to this miracle of nature. Their path led from the geysers to Uzon. Scientists have spent several years in the vicinity of the deadly valley. A total of some 300 meters.

The official source of one of the expeditions were recorded its presence. Dated this event in 1975 year. It was found by forester VS Kalyaev and volcanologist Leonov VL. This event from the first day was very significant and very important in the history of the reserve. Then it’s getting more and more interesting. The next 8 years (1975 - 1983) to Death Valley was directed numerous of expeditions with the leading experts of our country.

Volcanologists have collected a lot of samples and analyzes, and made a lot of conclusions and results. All this time they were trying to figure out the natural component of gas (mofetil), "the ruling" in the valley. At this point, it was found a huge number of animals and birds were dying in a deadly land. Thanks to the work done, the scientists found out periods when died those or other kinds of animals. It all starts with the melting snow in the spring. With the first warm rays of the sun small animals (rodents) and hares come to the Valley of Death. In search of food, they just do not stand a dose of poison. Then, from the mountains down to the valley  the larger inhabitants (predators) come to eat the corpses of dead animals, standing on the lower rung of the food chain.

For many years spent studying Death Valley, the researchers found here lot of inhabitants: lynx, fox, wolverine, crows, eagles and bears. No one, even though the impressive size and strength could not resist. For the first 8 years of the expedition, and the reserve has been collected about 200 corpses. In the distant past, a scientist from the expedition almost became a victim of this place, as it works without a gas mask. In addition, leaning over the cleft, he received a large dose of poisonous fumes that cause respiratory paralysis.

Today, there is more serious approach to solve this problem. Close to Death Valley in Kamchatka permanently live and work several groups of scientists and volunteers who break food chain in the natural environment. They just take away corpses of animals to large animals did not stay in its territory. These actions help to save the lives of many animals. This allows you to save a lot of lives.

On maps, Death Valley on the Kamchatka Peninsula is located in the upper of the river Geyser at the "toe" of the volcano Kikhpinych. It does not take a too large area. The total area is only 2 km long and 500 meters wide. 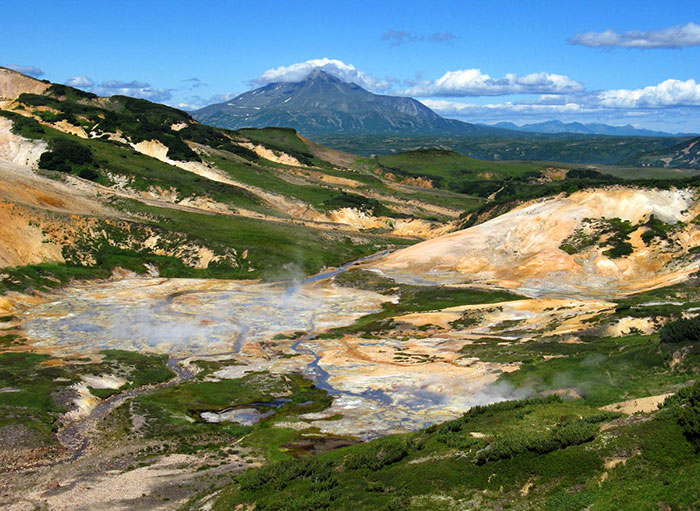 What is the cause of death of those who visit the land of the valley? Everything is very simple. The matter is in a special composition of the gas that is released from cracks of Earth crust. In "mofetes" lethal elements are present: hydrogen sulfide, carbon disulfide and carbon dioxide. Of course, the dose is not strong enough to "overthrow" the animal to death, but if the animal is here quite a long time, it condemns itself to a certain death.

During the experiments, the researchers noticed severe symptoms such as dizziness, headache, weakness and nausea. At one of these expeditions, even was died a dog of one of the researchers, the dog come to the territory of the Valley of Death.

Also it is necessary to focus on the fact that the anomalous zone is located in a recess, which contributes to the accumulation of gases and their great influence on the guests. Particularly dangerous to be here in calm weather, when the poison accumulates and concentrates. 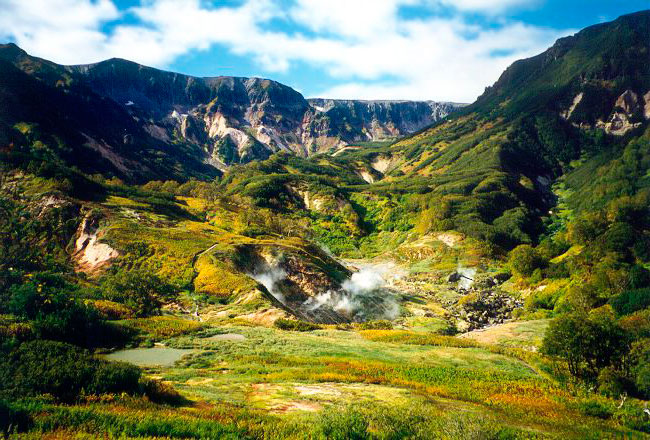 Inexplicably, but the fact

Also worth noting are some amazing features associated with death in this place. Scientists are still "scratching their heads" to solve these unexplained facts.

Period poisoning substances in the composition of the gas rising to the surface is very long and, therefore, is not obvious question - "Why do large animals (bears, lynx, and others.) just will not go away when the first signs of sickness?"

Found in these places cyanide gas kills everything in the area, even the microbes responsible for the process of rotting dead animals. But in the valley the half-decayed corpses of animals always were found, that is unbelievable.

Why is the death so attractive?

Mystery Death Valley on the Kamchatka Peninsula has not yet been solved by scientists from around the world. It is also dangerous, deadly, bloodthirsty and inexplicable. Despite all this, the anomalous zone is incredibly popular among tourists coming to the Kronotsky Nature Reserve.

Yes, the person attracts all the unknown, but is it worth to touch it, if the nature itself cut it off from encroachments?