If you love nature in its purest form and you want to see miracles, untouched by human hand, then you definitely need to visit the Kronotsky reserve Kamchatka Krai. On its territory there is magnificent, huge and still active volcano Kronotsky.

And it beckons its stunning views ...

The volcano is fascinating and surprising. Every year thousands of people come to look at it. Scientists volcanologists are still studying it and trying to find out the past, present and future. With varying degrees of success, however. It keeps its secrets so carefully, that does not seem to never open them. This giant is undoubtedly considered to be one of the most beautiful and enigmatic volcanoes in Russia. 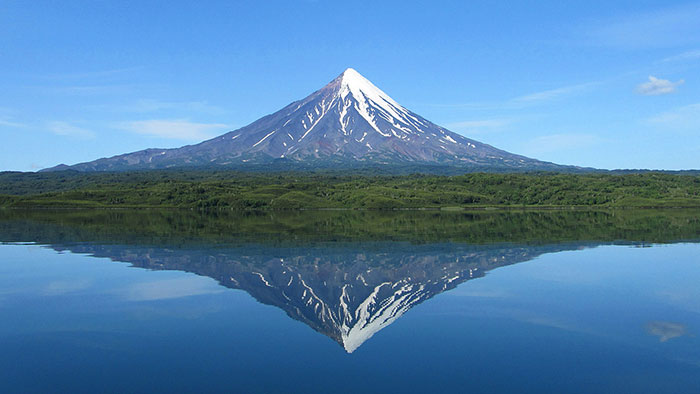 Kronotsky Volcano has another beautiful name - kronotsky. It is located on the Pacific coast. Beside this mountain there is well-liked by tourists Kronotsky lake. It found a "refuge" at the foot, so to speak, at the feet of the master.

On the other southeastern side, slope of the volcano right down to the Pacific coast, which is very like the sailors, as they are guided by its figure, even in the dark. This is a special world, a place that captivates its contradictions: the water and the flames, and the danger of clear benefit.

History, whose hand you written?

Kronotsky volcano last erupted in 1922-1923 year, as said in official sources. Since then it has seen little activity in 1942, when above its crater appeared a black cloud of smoke and steam, rising to 200 m up. This indicates that in the depths of his still lives that force which is able to destroy and burn down. Until recently its activity it was considered extinct and did not cause any interest among scientists, but - at the curious tourists. Besides the dark clouds, fumarole jets indicate its activity that seen at the foot of the volcano. A jet of hot water and gas constantly pull from them. As volcanologists say it is not dangerous, because the crater is closed tightly solidified lava, remaining from the last eruption.

Yes, it is a dangerous "friend", but that danger is what attracts and beckons. 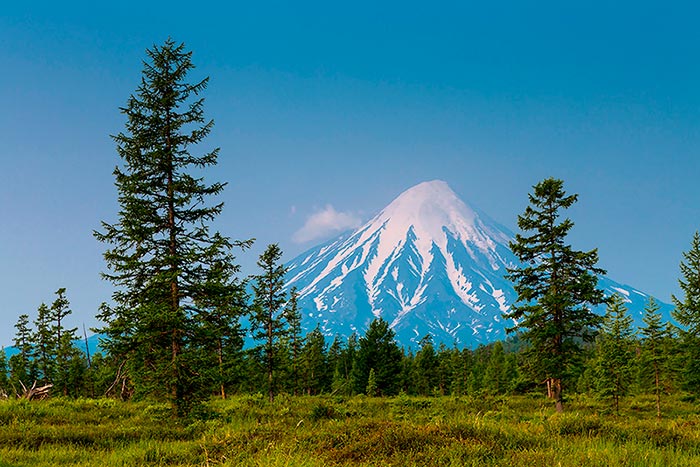 Private "dossier" of the volcano

Kronotsky Volcano is one of the most majestic, and most beautiful in the territory of Kamchatka. It can be compared only with the Koryak and Klyuchevskoy. In heightit it grew to 3.5 thousand meters (3528 m). The name is translated from the Itelmen language, the people who once lived in this area; it means "high stone mountain". The diameter of the base of the volcano is 16 km away. However, what mean these dry technical parameters next to that crazy energy that reigns around?

Volcano in contrast to their "friends" is different in that it has the correct geometric shape of the cone, topped with a glacier at the top of the white cap. Such a spectacle is simply amazing eyes of traveler. When you stand at the foot of it, look at the top, you can see how it glistens in the sun like a pearl.

As they say, nature is the best painter and sculptor in the land. Exactly, for many centuries, it has created a beautiful and magnificent view. On all sides the cone of the volcano Koronotsky is cut by washouts, how else they are called barranco. From the top of the mountain glaciers descend along them. In addition, between them amazing obelisks of lava (in the form of a mythical figure) are clearly visible, which was created by Mother Nature.

Also worth noting is the fact that all sides of the volcano have very steep slopes and they have an angle of inclination of about 33-35 grams. Mountainside is the best place where you can see petrify lava flows that create the very bumpy, but the magnificent silhouette.

Flora and fauna of the volcano

Kronotsky Volcano, except that amazes tourists with its beauty and surprisingly neat forms can please also incredibly rich flora and fauna, it is famous for rare animals and species of trees. 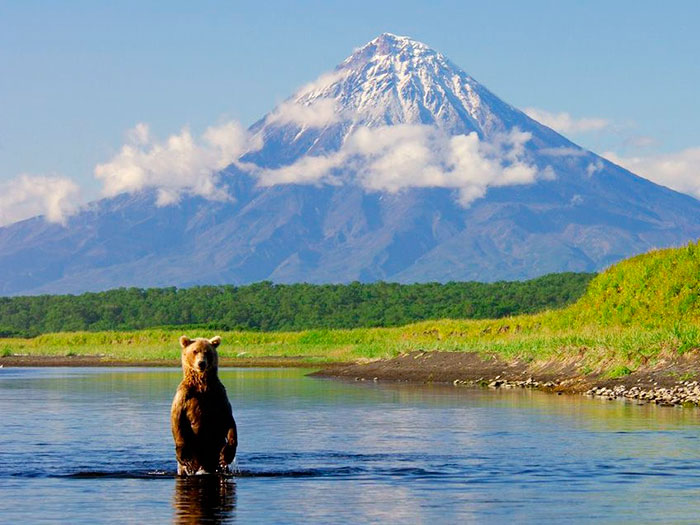 All the foot of the mountain covered with dense forest, mostly filled with stone birch. There also lives a huge amount of living creatures: birds, insects, rodents, carnivores, etc.

Total living in the vicinity of the hill:

Oh, that's the whole kingdom! Many of these species are rare and listed in the Red Book. Flora of the volcano has about 749 species of vascular type.

Tourism in the Kronotsky volcano is alive!

Kronotsky Nature Reserve is a popular tourist destination, which is to equip on the higher class. In addition, it is worth noting that in this conservation area is subject to certain rules that must be strictly followed in order to avoid problems with the law. Also, be aware that you can only visit the volcano through the purchase of tickets to special tourist companies. In the reserve is held only group tours. 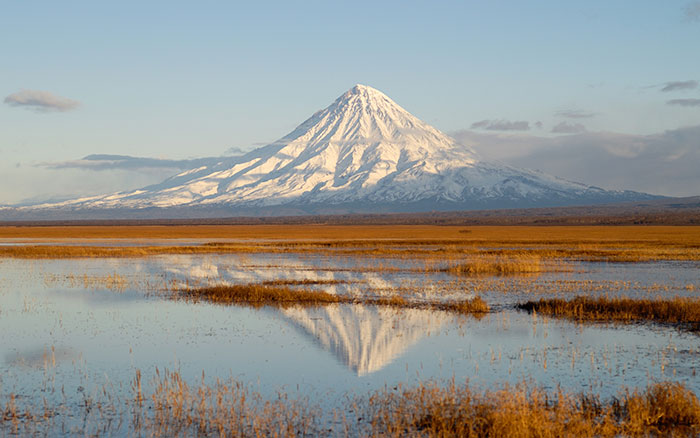 If you are looking for a place where you could go on vacation in Russia, then visiting the Kronotsky reserve and volcano of the same name - it's a great opportunity to have outdoor activities and vivid impressions. This Stone Mountain is a great sight of Kamchatka.

Do not miss the opportunity to explore the volcano, if it appears, because long ago a man and nature were one. It’s an amazing feeling a mixture of fear and admiration! May be there other emotions?

to top
Like this story?
Tell to your friends!