Nikolskaya Sopka is located in the center of Petropavlovsk-Kamchatsky. This place is like to visit the inhabitants of the city, walking by couples and companies on the slopes, sometimes even sunbathing on top. Among Kamchadals most popular name is Sopka of love.

Today we will visit Nikolskaya Sopka on more romantic route. Starting from the historic center. There are administrative buildings and the only one theater in the city - Kamchatka theater of drama and comedy.

The celebrations in the square is arranged mass festivities, they bake pancakes on a pancake week, establish small concert platforms. Sometimes there are competitions in streetball.

In summer, on holidays there is walking by motor boats along the coast.

And every winter before the new year figures of snow and ice grow on the square. Especially a lot of people, young and old attracts ice run. New Year's fireworks, too, can be seen on the square. It happens that the salute is organized by warships standing in Avacha Bay, colored volleys from their guns. Often in winter on the square hold competitions or just show of riders on snowboards or skis. Build a special hill or ramp, which starts from the slope of Nikolskaya Sopka.

In the city center stands a statue of Lenin. Sometimes I think that it is such an attribute of each little town. Whether a tribute to history, or simply forgot to remove. Further, Nikolskaya Sopka is to the right, and we go up the street Lenin, go up a small hill, past the theater.

On the left side we pass a small chapel. This monument - a mass grave of soldiers who died during the heroic defense of the city against the English and French invaders in 1854. On the left side of the attackers buried 38 soldiers, and 35 on the right valiant defenders of the port. In general, most of the monuments located on the Nikolskaya Hill today, established in honor of the events of that defense.

During the Crimean War to the shores of Petropavlovsk-Kamchatsky was approached by several British and French warships. Their goal was to capture territory and the weakening of Russian influence in the Pacific. Avacha Bay is one of the most comfortable and large port harbors in the world. During fierce battles our troops managed to repel the superior enemy forces and protect their city.

Walking down the street Lenin, we come to the Square Svoboda in the center of which is a monument to the wars of the Soviet Army - the liberators of the Kuril Islands in 1945. Every year, to celebrate the victory, people lay flowers to the monument and congratulate veterans.

Then we will go through the park and move closer to the hill. During Soviet times, Nikolskaya hill was used as a recreation park. Were laid tracks for walks, worked attractions and the dance floor, it was possible to use a shooting range or a jump from a parachute tower.

All major holidays and festivities were held in this park. But over time, this place has lost its meaning, and all city events began to hold on Lenin Square. The area of the hill was declared a monument of nature and any economic activity here has become prohibited. Gradually, the place fell into disrepair.

Through this arch, which served before the entrance to the park, we will climb up the ladder and then go to right up close to the top.

Here we will visit three of the monument dedicated to the events of Defense in 1854.

Up to the monument "Slava" leads stone stairway. The monument is made of cast iron and topped with a spire and cross.

Then go to the monument to the heroes of III battery of Lieutenant Maksutov accepted a fierce battle in the defense. On the stone pedestal is located cast iron cannon aimed to Avacha Bay.

On a narrow path, a bit lower we get to the place of Maksutov battery. It was recreated after the war in 1959.

Go down the ruined stairs, we find ourselves on a narrow strip of coast. It extends in both directions along Nikolskaya Sopka. Water grinds stones and glass that falls into the water, and therefore a lot of round stones.

You can just sit on the bench, watching the sunset and the sun setting on a track of orange sun. Or sit with closed eyes and listen to the sound of waves that rolled ashore.

We will go along the coast to the right toward the center. If you are lucky, you will find starfish or jellyfish washed ashore tide. Everywhere there are mollusks that feed the local birds. 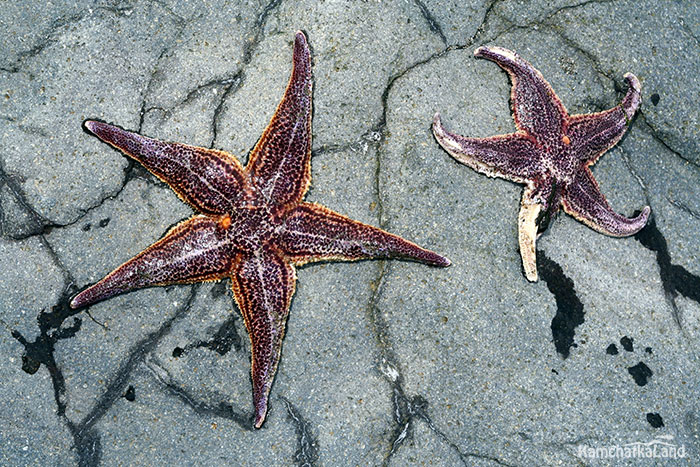 On this narrow strip of pebble beach, along the steep slopes Nikolskaya Sopka, we get to the place where we started our route.