Nalychevo Nature Park attracts guests of the peninsula with plenty of hot and cold thermal springs. Imagine that in this comparatively small territory (about 709.177 thousand acres) there are more than 200 springs there! They are situated at the head of the river basin and divided into seven major groups. 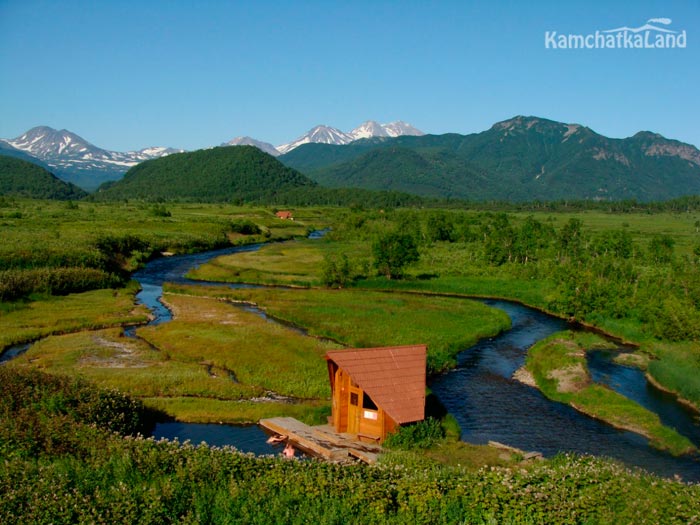 The most visited springs of Nalychevo Nature Park are Talovye, Nalychevskie, Dzendzurskie, Kraevedcheskie as well as Shaibnye, Shumskie springs.  The temperature of the springs’ water varied between 14°С and 75°С.  Some of the biggest springs of the Nalychevo Valley have the rarest chemical composition that you can’t find anywhere else on the Earth. The springs of the Valley have a therapeutic effect on musculoskeletal and cardiovascular systems, because it includes such chemical elements as fluorine, iodine, boron, lithium, germanium etc. 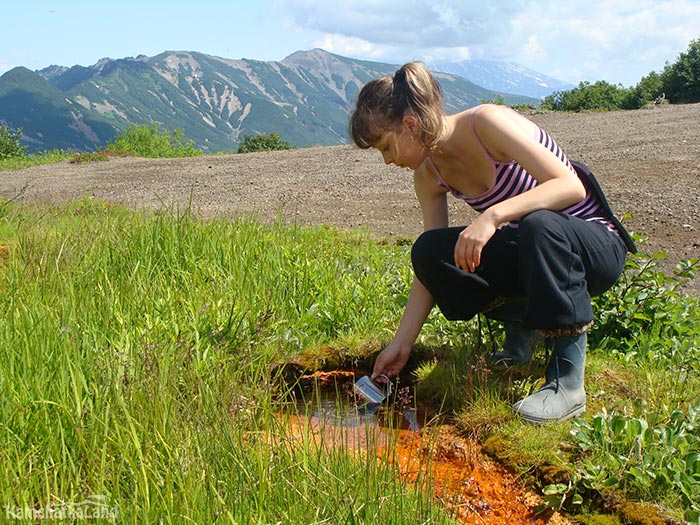 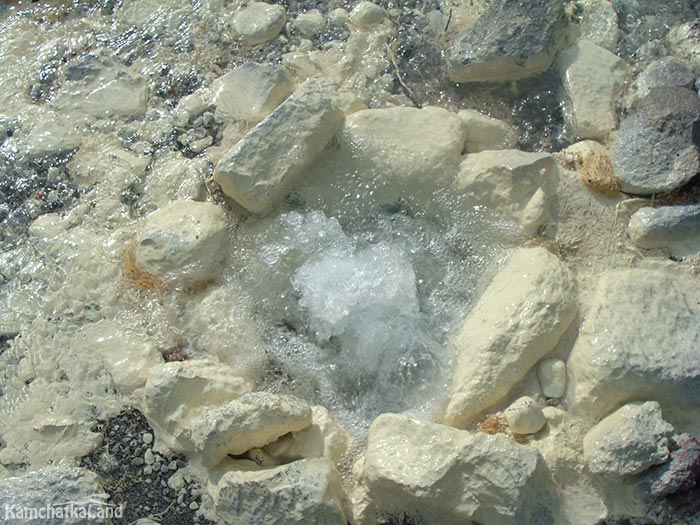 History of the Natural Park

Nalychevo Nature Park was established on the 18-th August, 1995.

The first springs in Nalychevo have been described in the early 20th century by Kamchatka local historian Procopius Novograblenov. First, in this valley there was a small base, where used to stay researchers and geologists. Tired of hiking and exploring the local area, they could relax in the healing waters, spend the night in cabins with more comfortable conditions.

Later tourists came here.  In the early 1970s visiting Nalychevo Nature Park became very popular. It was created a tourist route that passes through the most interesting places in the valley as a result.

Unfortunately, with the influx of visitors increased human impact on nature. However thanks to the activities of public organizations, the Nalychevo Valley area acquired the status of a specially protected territory and was included in the UNESCO World Heritage List in 1996.

The first director of Nalychevo Nature Park was a famous traveler, Vitaly Menshikov, who was taking an active part in its creation. 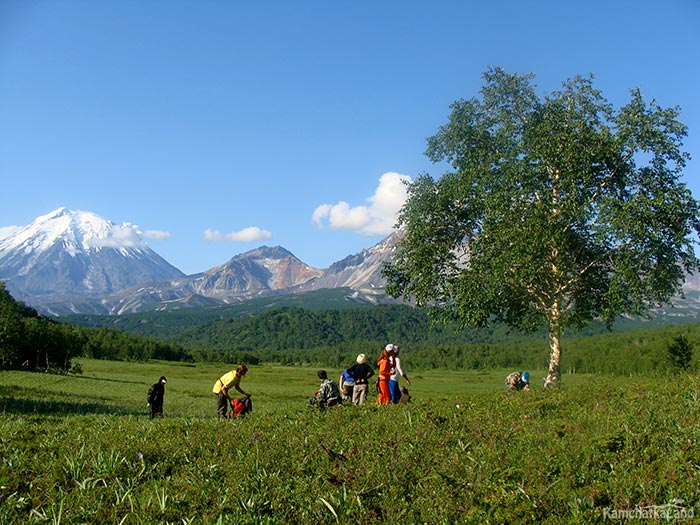 Native inhabitants of Kamchatka have a legend saying that a man, who enters the waters of hot springs in the valley at first light, will be able to cognize the secrets of perpetual youth, beauty and health! Wintertime of this region is characterized by hard frost, but in summertime weather is much warmer due to volcanoes protecting the valley from high winds.

In October snow mantle begins to cover the ground; in winter a height of snow mantle is about 2 meters. Active volcanoes, which are located on the territory of the Park, represent a centre of strong glaciation.

Relief of the Nature Park is very diverse. Volcanic edifices are a part of mountain massif and range; Natural landscape differs from birch forests to slag fields and plains.

Nalychevo Nature Park is surrounded by 10 volcanoes that form a natural bowl with a unique climate. The Koryak volcano is one of the highest, it has a height of 3456 meters and a height of Zhupanovsky is 2923 meters.

All modern hiking trails of the valley start from crossing the pass of Avacha volcano. Besides the classic trekking route above 50 kilometers, there is a possibility to get to the Nature Park Nalychevo by more exotic way - on horseback or helicopter, as well as skiing in winter. 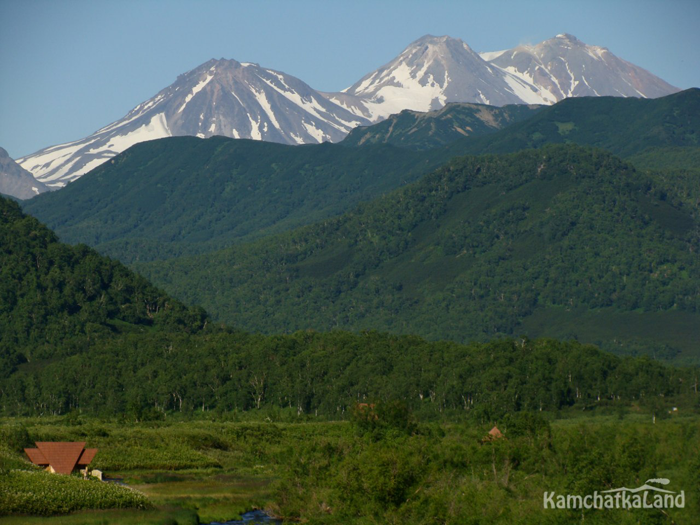 The flora of Nalychevo Nature Park is rich and diverse. The uniqueness of the flora is especially estimated by the inhabitants of the Japanese islands. Many of the plants, growing in the Park, are listed in the Red Book of Russia. Here you can find Rhodiola rosea, slipper Yatabe, Daurian lily and many other rare species.

The wealth of berries and mushrooms is the real joy for the guests of the Park. 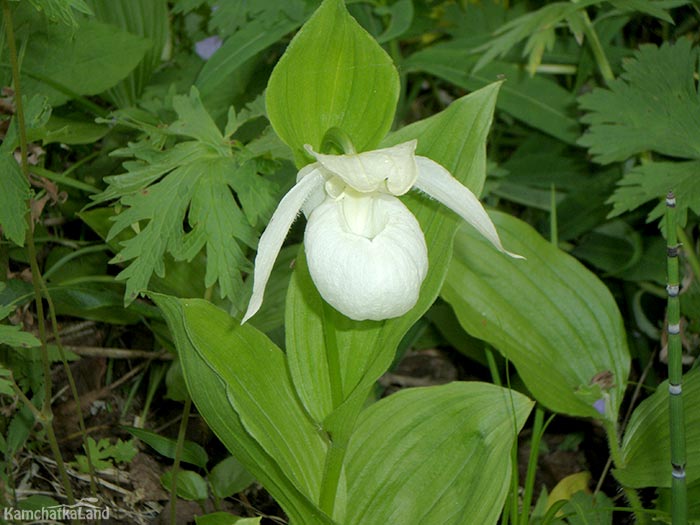 The Fauna of Nalychevo Nature Park is a diversity of birds and animals: 33 types of mammals, 145 species of bird, 22 species of fish, out which only 5 species of Pacific salmon! Here you can meet northern wild deer, bighorn sheep, sea eagle, glutton, lynx, Pacific brant goose, golden eagle, aleutian tern and, of course, the king of Kamchatka – brown bear. At the time of spawning fish and berry ripening the highest concentration of bears gathers on the upper reaches of the Nalychevo. It's almost impossible not to see a brown bear when visiting the Valley, so you must act correctly and then the bear will peacefully refresh in its territory without showing of aggression.

In the 1970s Kamchatka received less number of tourists than now and population of brown bear in the Nalychevo Valley comprised about 100 animal units. Unfortunately, in response to increasing of visiting the Valley, number of bears had declined to the dozens. There has been the same situation in regard to the populations of northern deer and bighorn sheep since the early 1990s. Therefore for today all these mentioned species are listed in the Red Book.

There it was built some observation towers where you can watch some active volcanoes.

The main goal of guests visiting the park is the Central cordon of Nalychevo. A group of three hot mineral springs was refined and changing rooms were built on the bank of the Goryachaya river. The composition of the water in the baths has healing properties. The concentration of mineral salts has beneficial effects on musculoskeletal, cardiovascular and nervous systems. 20-minute staying in the water takes you into a state of nirvana. 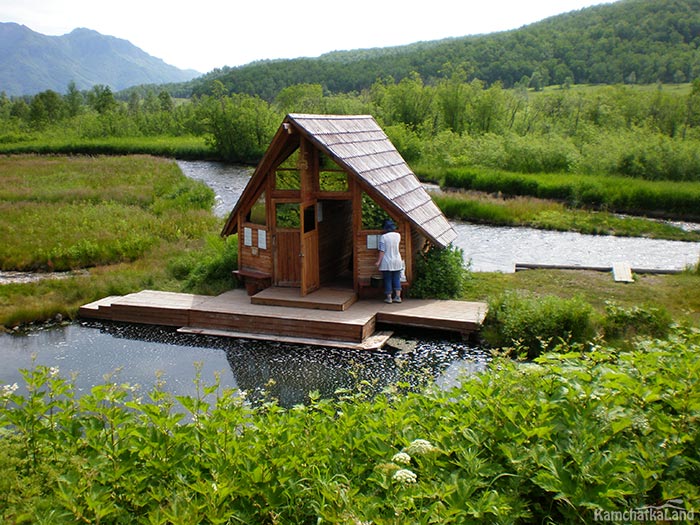 We recommend you to watch one of the main sights of the park Nalychevo is travertine boiler. Boiling water runs from the old geological borehole. This water is so rich in minerals and salts, so their concentration has adversely affect on the surrounding plants. Therefore, employees of the park paved artificial stream, water from the boiler flows into the swimming place and then in the river Goryachaya (Hot). The banks of the creek carefully supported, so that the water does not spread through the neighborhood. 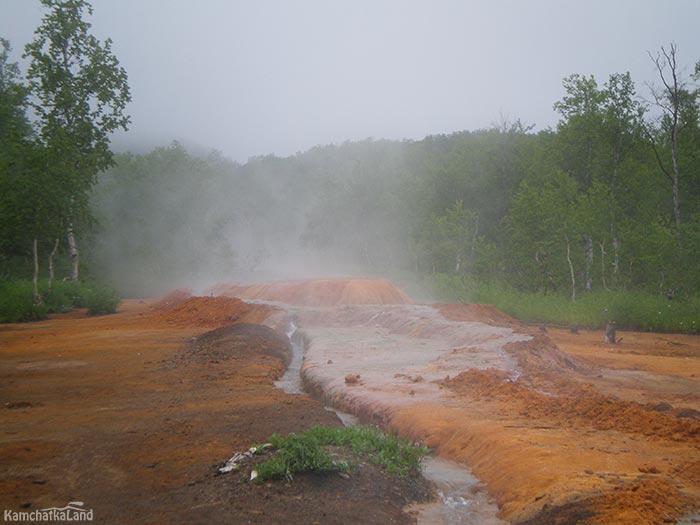 Nearby it was built a two-storey house“Environmental Education Center” was named after Vladimir Ivanovich Semyonov, a distinguished researcher of Kamchatka. There you can visit the museum, in which you can know about the flora and fauna of the park, as well as the life and work of researchers who used to study the area.

There are wooden cabins for tourists in the center of Nalychevo, where you can freshen up after the trekking. There is also a small shop, an observation tower, a helicopter landing, as well as special area where you can put the tent and sit around the campfire on the territory of Valley.

Winter attracts tourists by different kinds of extreme tourism, such as skiing, going snowmobile, snowboarding and dog sledding. You also can get to climb down from the nearby volcanoes, descent of which has a height of a few kilometers. 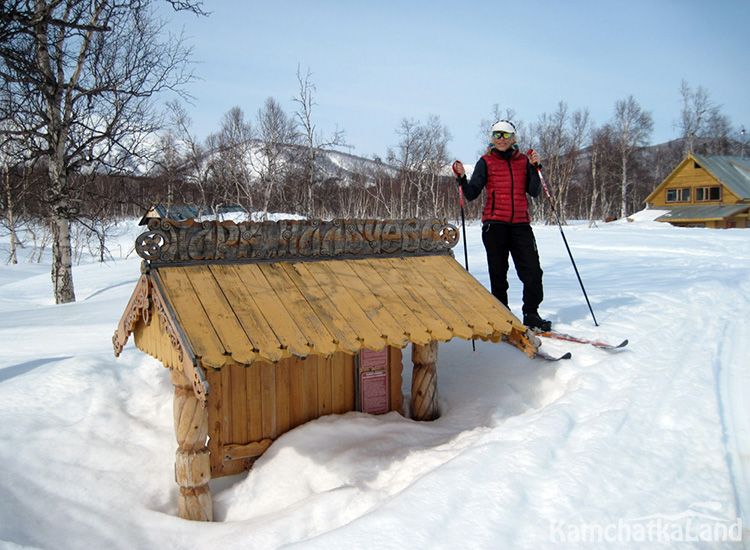 Skiing lessons take place from April to May.

Every summer there are volunteers who are ready to assist in rehabilitating the park. Volunteers have done such works as marking hiking trails, restoration of houses and baths, repairing and installing of wooden bridging across the rivers and streams. A lot of work! Nalychevo Park staff is always grateful for help from indifferent people who have skillful hands and good hearts. We offer free accommodation and food for volunteers. If you find it interesting, please contact us. 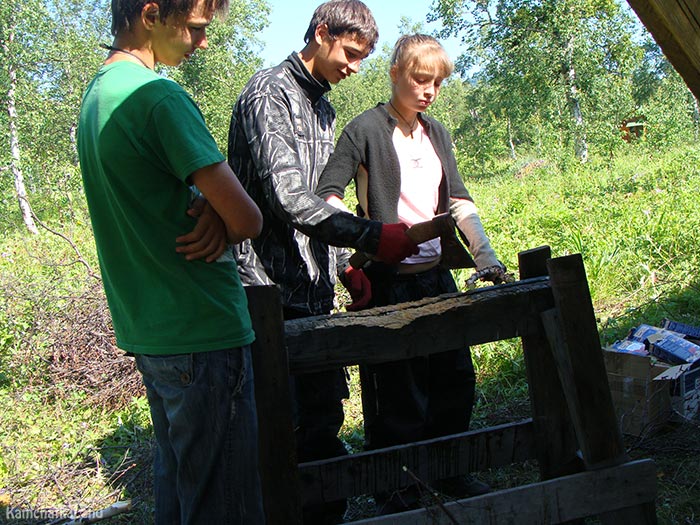