The Uzon Volcano: active processes of the Earth

Uzon Caldera - the pearl of the Kronotsky Nature Reserve on the Kamchatka Peninsula. It is timed to the central part of the Eastern volcanic belt of Kamchatka - Uzon-Geyser volcano-tectonic depression.

It is unlike anything the area of contemporary volcanism, mineral and ore formation, which in 1996 was included in the list of UNESCO World Heritage Site in the category "Volcanoes of Kamchatka". At Uzon you will meet an original and fascinating symbiosis of volcanism and wildlife. 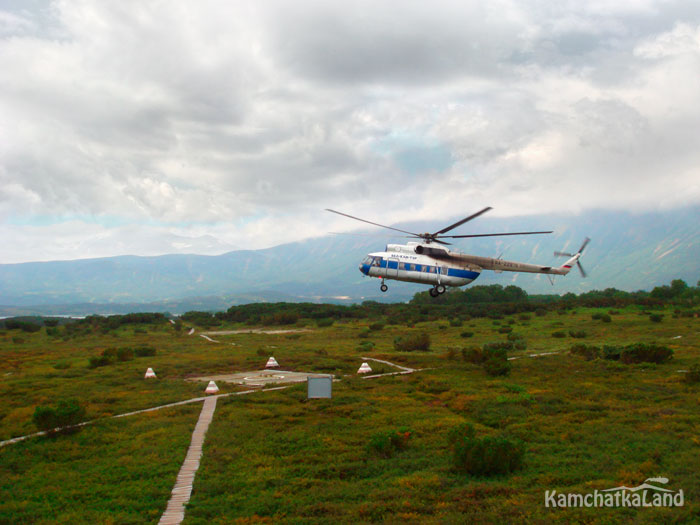 Caldera of Uzon volcano was formed about 40 thousand years ago. Once its place was occupied by tall conical volcano over 3,000 meters. Today its outer edge surrounds the perimeter of the caldera. The top of the volcano "collapsed" in the empty space which was formed from the volcanic eruptions. This area ranked among the large calderas Kamchatka: the area of this vast basin - about 150 square kilometers (9 × 12 km).

The flat bottom of the caldera is located at an altitude of 700 meters above sea level and is bordered by steep ledges in height to 800 meters from the south, west and north. The wall of the caldera gradually turns to the external plateau, the highest point here - Barany peak got its name because of the large number of sheep living in the surrounding area.

In the caldera are located hundreds of lakes, the surface of which is constantly boiling, bubbling and foaming. The reason for this is the activity of underwater fumaroles. But Lake Bannoye is even more dangerous: under its false bottom (crust of solidified sulfur) there are outputs of radon and a reservoir of molten sulfur, so the water is warmed to 40 ° C, even in winter.

In the east of the caldera is located its the youngest volcanic formation - Dalnee Lake, occuping a 1.5-km funnel of explosion. Its age - about 7600 years. The largest of the lakes in the swampy western part of the caldera - Central. Columns of steam rise above yellow fumarole fields. Many streams (Dalniy(Far), Veseliy(Cheerful), Zapadniy(West) and others.) and the rivers flowing along the bottom of the caldera, give rise to Shumnaya River. 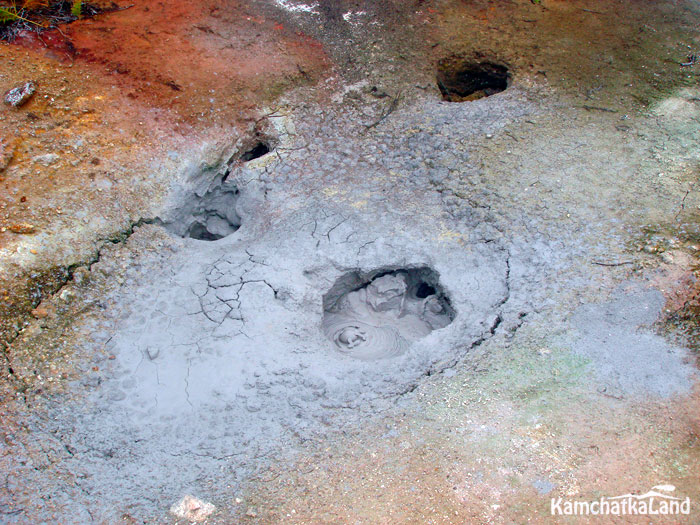 Caldera of Uzon is interesting from the point of view of studying increased hydrothermal activity of the crust, which is concentrated in its western part. More than a hundred springs, and about five hundred independent or interconnected hydrothermal manifestations (mud pots and volcanoes, steaming and heated area with exits of steam and hot water, hot lake in the craters with a diameter of up to 150 meters) are the subject of observation scientists. They are convinced of one thing: Uzon - a true natural laboratory in which you can easily monitor and investigate the various geological processes, besides this place exit of the youngest oil in the world. 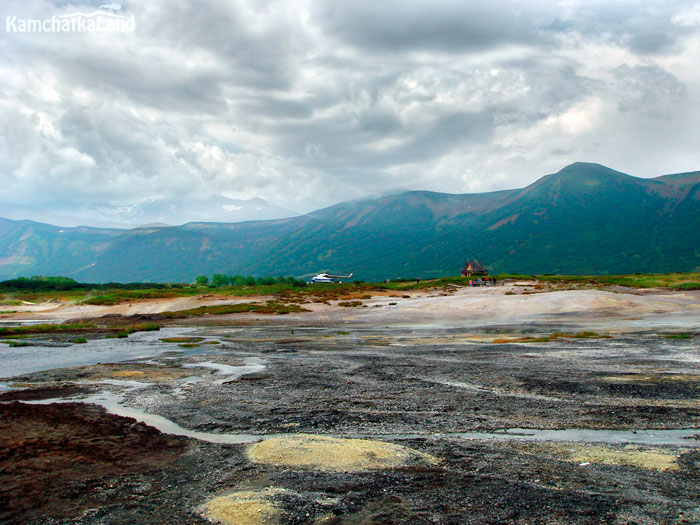 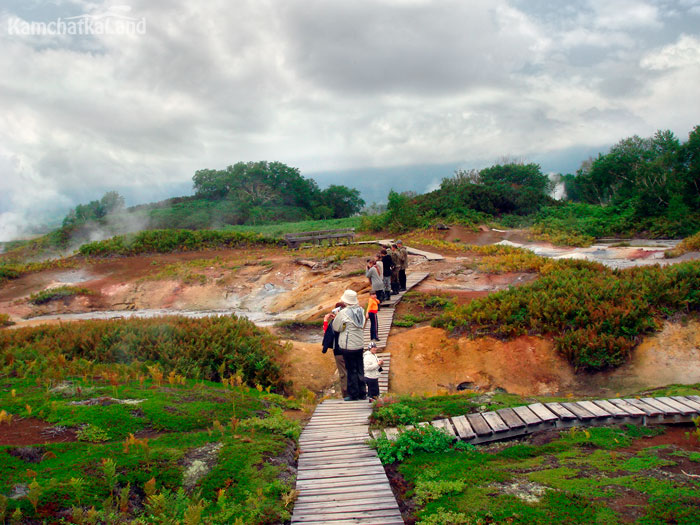 In the groundwater coming on a surface detected ore minerals such as copper, arsenic, zinc, mercury, and so on. No need to be a good chemist to notice the perimeter of the sources of ore deposits of minerals and metals, which are formed by the decomposition of cooling water solutions. In 2008 it was recorded and studied the formation of a new six-meter geyser Mutniy. 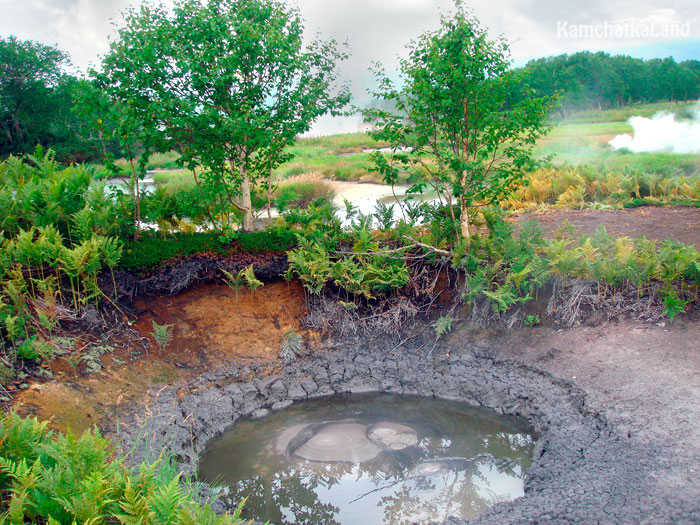 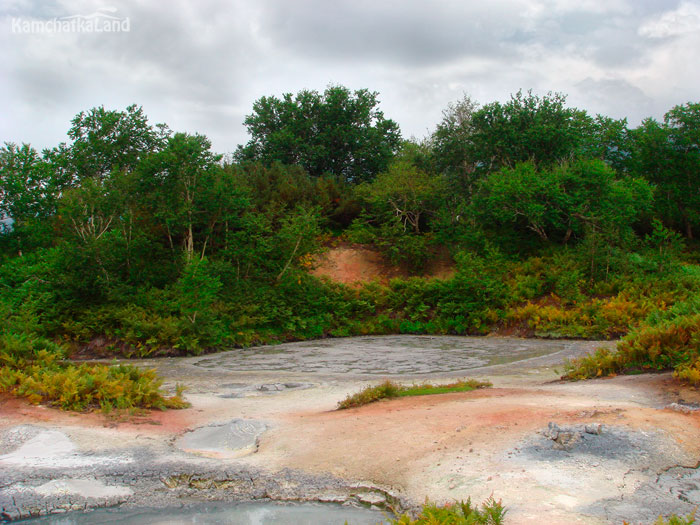 Flora and fauna of the place is very diverse. In mid-April to early May, here come the Kamchatka bears. At summer and autumn is the peak of diversity of their vegetarian menu at this time the birch forest and berry tundra pamper brown giants by lush grass, blueberries and pine nuts.

In the thermal springs of caldera Uzon inhabits several species of thermophilic bacteria and algae, and Archaea - the unique single-celled microorganisms. All of them are absolutely comfortable in boiling toxic solutions, but instead oxygen absorb sulfur or hydrogen sulfide. For example, in the 90s of the last century on the territory of Uzon springs were found thiobacteria living in a heated to +90 ° C water, and coloring its white.

Not far from here is located the most amazing place in Kamchatka - the Valley of Geysers. You can read about it and see our pictures in our article.