Sheveluch volcano is located in the north of the Kamchatka Peninsula. If you measure the distance from the city of Petropavlovsk-Kamchatsky, then along a straight line it is 440 kilometers. Because of remote location and difficult to get there, the groups of tourists to these places are organized very rarely.

At its height, the volcano Sheveluch ranks 9th among the hills on Kamchatka. It rises above sea level at 3283 meters. In the first place - Kluchevskoy, with a height of 4750, which is the highest peak in Asia.

Volcanic structure consists of two parts. The highest part is called - Old Sheveluch. In ancient times, all the activity going on here. Later pinnacle fell deeper and formed a giant caldera. This caldera, at an altitude of 2800 meters, formed a new active crater - Young Sheveluch. It is in this crater is now emitting lava and ash with gas.

Hikers who climb the volcano Sheveluch, observe how the vegetation changes with altitude. Walking through the woods, mostly consisting of stone birch and cedar, we get to the meadows above the slope. The higher the climb, the less common plants. Of course, whenever a strong eruption, the flora is quite affected. Volcanic ash covers the vegetation and it dies, burning forests at the foot, and the lava burned all alive. 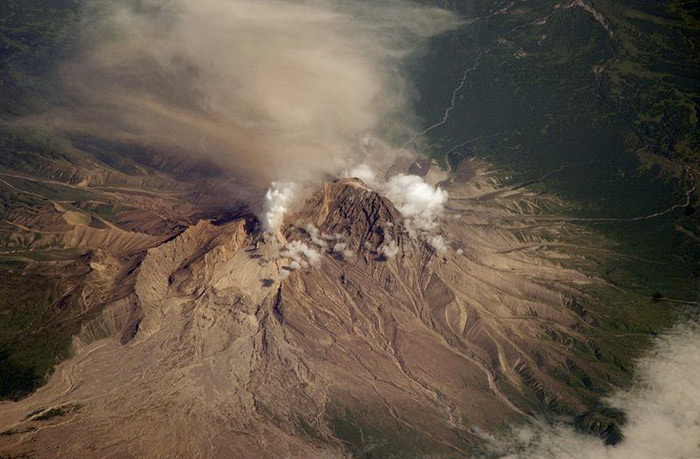 From the top of the volcano on the barranco come down glaciers. In the summer, when snow melts from them originate from big and small rivers, which run from Shiveluch in different directions. But even in the warmest summer on top of glaciers do not melt until the end.

Volcano Sheveluch, perhaps, the most active on the Kamchatka Peninsula. Over the past history it can be seen as weak eruptions and catastrophic. Explosive eruptions occur quite often.

We can say that Sheveluch erupts constantly, intermittently for several years. Usually the eruption accompanied by the ejection of ash and gas for several kilometers into the air. This cloud can move many tens of kilometers, and sometimes more than a hundred. The most catastrophic eruptions occur about once every 100 years.

The last violent eruption took place in November 1964. A few days before the disaster there was constant shaking of the earth surface. Aftershocks were not very big, but it happens all the time. Animals usually feel approaching trouble, and left the day before the nearby area. 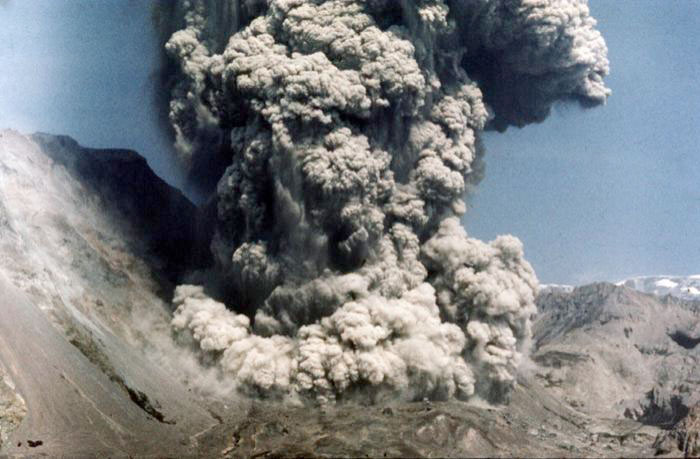 November 12 morning at the volcano Sheveluch explosion occurred, and on the surface to an altitude of 15 kilometers escaped column of ash. Explosions and the roar were heard of tens of kilometers from the scene. It formed a huge cloud of gas, ash and dust. The wind was blowing east, and the cloud was rapidly moving towards the Pacific Ocean. This picture could be seen even from space. 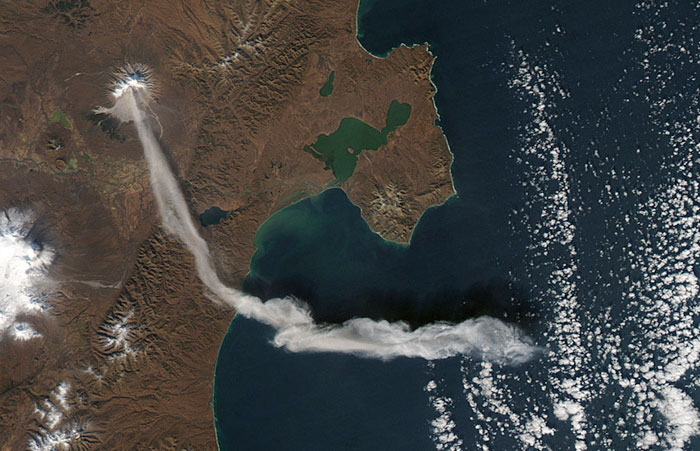 On the way there was a small fishing village Ust'-Kamchatsky. A cloud covered the sun, and the village was plunged into darkness. It was a rich ash falls. The streets of the village were covered with ashes to a thickness of 1 mm. Just remember the movie "Silent Hill".

In November, the slopes of the volcano, and the top covered with snow and glaciers. The red-hot volcanic rock after the explosion melted the glaciers, and the entire flow of water, mud and debris rushed down, sweeping away everything in its path. The vegetation at the foot of the volcano was destroyed in the 15 km. Even now we can see the consequences of the vanishing of these flows.

In January 2014 the volcano Sheveluch again threw away a column of ash to a height of more than 8 km. We may still be able to see the violence of the elements in the new year.

Sheveluch volcano is under the supervision of scientists seismologists. There is constant monitoring of the Earth's activity. The nearest towns to the volcano is the Keys and villages Ust'-Kamchatsky. In the event of a catastrophic eruption strongest it’s possible evacuation of people living there.

Tourists visiting the volcano Sheveluch rarely ascent to the top. They tend to observe activity on the slopes or from the side. The rise to the top climbers make with good physical training.

As in recent years has become a popular tour to the volcano Flat Tolbachik. The 2012 eruption, which attracted many tourists from around the world. The eruption was of calm nature. You could see lava flows in the vicinity.