Kuthiny Baty - an amazing place from the viewpoint of geology and extraordinary in its beauty. It is located in Ust- Bolsheretsk district of Kamchatka, near the place where the river Ozernaya originates from Kuril Lake. Kuthiny Baty is the formation of pumice. Once upon a time when the landscape has changed in this area, there were volcanic eruptions everywhere. Acid lavas were highly full of gas, peaked on the ground and quickly froze. Thus formed porous rock - pumice. Over time, this place was covered with earth and grew up new forests. But things are changing. And the small creek began to grind the rock, and the wind finished of creek initiative and opened it for public eyes the white cliffs. 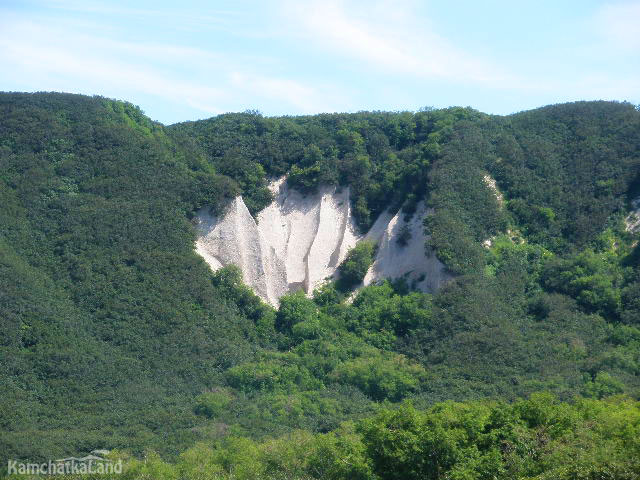 Name Kuthiny Baty came from legend about the main character of Kamchatka - Kutkh. Usually Kutkh appeared before the people in shape of a crow. According to ancient beliefs, it is believed that he was involved in the formation of the Kamchatka land and all indigenous peoples who live here. There are many stories on this topic; you can buy Kutkh figurines of wood, as well as from the bone from local craftsmen. One of these legends says that Kutkh was a master fisherman. He often liked to fish in the waters of the Kurile Lake, where during the spawning season is a huge amount of salmon. At the time have used for fishing wooden boats by the type of canoe. After each of his fishing, he put the boat to dry.

Kutkh have been much to do, it was necessary to engage in the creation of the world. And the next time, when he was going fishing, too much time passed, and the boat turned into stone. He took a new boat and after fishing put it near to another to dry. And formed a rocky amazing place - Kuthiny Baty, from afar it resembles ranked boats. A “Bat” is Kamchatka canoe. The height of this natural monument reaches one hundred meters. How to get to the nature monument Kuthiny Baty

If you decide to go hiking route to the Kurile Lake, certainly have a look here. This you anywhere in Kamchatka no longer see. This bizarre pumice outcrop located near the Kuril Lake, if you look at a map, it is in the north-east. As the transport connections here does not work, you have to go on foot. We encourage you to join any group and do not commit tracking alone - in this area there is a large number of bears.

And if you wondered what attracts many tourists so far away, read about it in our note “Kuril Lake”. Then we made a video from the Kurile Lake.